The German government is giving the go-ahead to send the tanks Leopard to Ukraine.

The US is also said to be ready to send heavy tanks to Ukraine, a blatant provocation, says Russia's ambassador to the US in response to the tank orders.

After long discussions it is clear: The government in Berlin gives the green light for the delivery of the tank Leopard to the war Ukraine.

"This decision follows our known line of strong support for Ukraine," says Chancellor Olaf Scholz in a press release.

According to the German government speaker Steffen Hebestreit, the message is that Germany sends its own tanks and also allows other countries to do the same.

In total, the German contribution to 14 tanks consists of the model Leopard 2A6, one of the latest variants. The German goal is to quickly establish two battalions with Leopard 2 tanks in Ukraine, writing several media. The Ukrainian soldiers who will man the tanks will be trained in Germany.

During the day, Washington is also expected to announce that Ukraine will receive at least 30 tanks of the type M1 Abrams, the main tank of the USA army and marine corps. 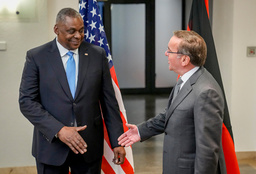 Michael Sohn/AP/TT
Lloyd Austin and Boris Pistorius, the defense ministers of the USA and Germany, shake their hands before a meeting in Berlin last week.

Russia's ambassador in the USA calls The Wall Street Journal's information that a "significant" number of Abram wagons should be sent to Ukraine for "another blatant provocation".

"If the US decides to supply tanks, it cannot be justified by arguments about 'defensive weapons'", writes Ambassador Anatoly Antonov on the message app Telegram.

The Kremlin spokesperson Dmitry Peskov tells reporters in Moscow that the Western tanks will "burn just like everything else".

"Technically, it's a failed plan", he says.

In connection with the German announcement, the Berlin government is promising to give a rapid formal go-ahead to those countries which claim to wish to send their Leopard wagons to Ukraine. 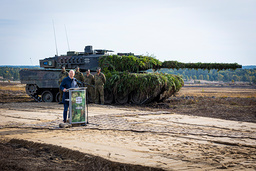 Moritz Frankenberg/AP/TT
Germany's Chancellor Olaf Scholz gives speeches to soldiers in front of a tank of type Leopard 2 in the German Ostenholz in October 2022.

Spain has said that it is ready to deliver its Leopard to Ukraine, as well as Poland. After the German announcement, Polish Prime Minister Mateusz Morawiecki thanks the government in Berlin and calls the decision "a major step towards stopping Russia".

Sweden does not exclude any

Several other countries, including Norway, claim to consider sending Leopard cars as well.

According to data to Norwegian Dagens Næringsliv, no decision has been made, but the government in Oslo is considering sending up to eight of its total of 36 Leopard 2. Even in Finland and Denmark, politicians are discussing the issue, according to the Nordic media.

However, Sweden will not send any Leopard cars – in Sweden called tank 122 – to Ukraine at this time, according to Minister of Defense Pål Jonson. To Svenska Dagbladet Jonson says that it is not excluded that this happens at a later stage.

The tank Leopard 1 started to be used in 1965. The model Leopard 2 then began to be produced in the 1970s, then on behalf of the West German army.

Leopard 2 weighs over 60 tons, can travel up to 70 kilometers per hour and hit goal at a distance of up to four and a half kilometers. When the cannon is directed forward, the tank is almost 11 meters long.

About 20 states have had, have or will receive Leopard 2, including Denmark, Finland, the Netherlands, Norway, Poland, Turkey and Sweden.

Leopard 2 in turn has subvariations, which are now known as 2A4 to 2A7.