Tempers flare again as migration and refugees are debated in the EU.

Sweden's forthcoming presidency is pointed out as both a helper and a spoiler in the search for a common policy.

Seven years after the major refugee crisis in 2015, the waves of discussion resurgence as Members of the European Parliament talk about the situation in the Mediterranean.

Ahead of an extraordinary meeting of migration ministers on Friday, the European Commission has put forward an urgent action plan to tackle the situation, with Italy and France squabbling over rescue ships picking up the stranded and the number of new arrivals - mainly economic migrants - soaring once again.

At the same time, when presenting the plans to Parliament in Strasbourg, the European Commission is pressing hard that the situation is now yet another proof of the need for a common asylum and migration policy.

What does Sweden do?

However, Member States have still not been able to agree on the Pact proposed by the Commission in September 2020.

The main issue is the fight over who should take care of the new arrivals. The Mediterranean countries want help from others, which is not at all popular in Eastern Europe in particular.

Now that it will be Sweden's responsibility from the beginning of the year to try to negotiate an agreement, as the country holding the Presidency of the Council of Ministers, opinions are divided on whether this will help or hinder the work.

In the committee in the European Parliament dealing with migration, hopes have changed considerably, before and after the Swedish elections in September.

"They were very keen for Sweden to take over, given the historical capital we have in the protection of the right to asylum. Now they are terrified of Sweden", says Swedish member Abir Al-Sahlani (C). 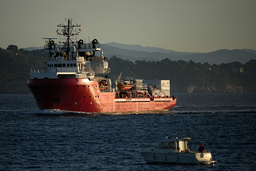 Daniel Cole/AP/TT
The situation surrounding the Norwegian flagged aid vessel Ocean Viking, which Italy stopped from dropping off rescued migrants and refugees, has given rise to new momentum in the EU's refugee debate.

However, colleague Tomas Tobé (M) expects Sweden to push ahead, even if the Swedish Democrats, which are critical of the migration pact, acts as a support party for the new government.

"The negotiations between the Member States have been very slow, but at the moment there is a great deal of support for us to get a European migration policy in place. So I'm quite hopeful", Tobé says.

He sees Swedish Democrats' role as no obstacle.

"We have a collaboration with the Swedish Democrats in the Riksdag on migration issues and Sweden must have its own national policy itself. But there is no doubt that it is in Sweden's interest to get this in place, also at European level", says Tobé.

"It has been a clear Swedish priority from the previous government and also the new government that we need a European migration policy in place", he says.

Running out of time

After Sweden, Spain will take over the Presidency of the Council of Ministers from 1 July 2023. After that, there will only be a few months left to find a consensus, before everything turns into a campaign for the next EU elections, in May 2024.

Responsible EU Commissioner Ylva Johansson has drawn up an action plan aimed at reaching a settlement by February 2024.

At the same time, in the European Parliament, Malin Björk (Left Party) is hoping for immediate progress already this year, during the remaining month with the Czech Republic as the country holding the Presidency.

"When you have the Swedish Democrats at the helm, it is clear that you are worried that it will only be repressive policy. Earlier we thought we would wait for the Swedish Presidency. Now we are several rapporteurs in the responsible committee who feel that everything we can get done during the Czech Presidency is perhaps the best", says Björk in Strasbourg.

On Monday, the European Commission presented an emergency action plan to meet the migratory and refugee situation in the central Mediterranean. According to the Commission, this year more than 90 000 immigrants have arrived this way – 50 percent more than last year.

The 20 points of the Action Plan will be discussed by EU Ministers of Home Affairs and Justice at a meeting in Brussels on Friday.

Quotes: That's how it sounds in the European Parliament

Here are some of the steps taken during the debate on migration by MEPs on Wednesday:

"It's like having a parachute, yet jumping out of the plane without it."

(EU Commissioner Margaritis Schinas said that the EU has a proposed migration pact, but cannot agree on it).

"The question is why these boats can go away at all – and why some relief organizations act as smugglers' ferries."

"There is only one solution to stop the flow: the Australian model. Put pressure on the countries of departure and push the migrants back."