President Bolsonaro's party is now protesting, three weeks later, against the outcome of the elections in Brazil.

More than half of the voting machines in the elections were flawed, the party thinks. If the votes from these are excluded, Bolsonaro is said to have won.

The President himself has not shown himself – which is explained by the fact that a skin disease makes him unable to wear pants.

The result is already valid and clear by the electoral authority TSE : Social Democrat Lula da Silva won with 50.9 percent of the votes, while Bolsonaro received 49.1 percent.

However, more than three weeks after the election day, the rejected extreme right-wing party, PL, has filed a complaint for TSE (Tribunal Superior Eleitoral). Older machines in the electronic voice system used by Brazil do not have sufficiently detailed logs, the party claims, which therefore requires that the votes from them be excluded.

"These shortcomings make it impossible to verify the votes", says Marcelo Bessa, a lawyer hired by PL, to the media in Brasília.

"That doesn't mean it was cheating, but that we can't be sure that these ballot boxes are credible."

However, the complaint concerns so many voting machines, more than half of them from all over the country, that it could affect the result. If all these many millions of votes are removed, Bolsonaro gets over 50 percent, and would thus be the winner in the election.

The electronic electoral system has been used since the mid-1990s without previous complaints of this kind. So far, no independent experts agree with PL on this line. And TSE responds to the notification by requiring a supplement. PL must explain within a day if the notification also applies to the first round of the election in early October. If not, the notification will be rejected, says TSE.

Bolsonaro has long talked about the whole electronic voting system that Brazil uses opening up to cheating. Like the model Donald Trump i the USA, who claims that he won election there in 2020, however, he has never presented any evidence.

The formal shift of power will take place only in January, and until then Bolsonaro will govern the country regardless. However, his absence from the public now raises more and more questions. He has largely not shown himself since the election loss, i.e. In over three weeks. 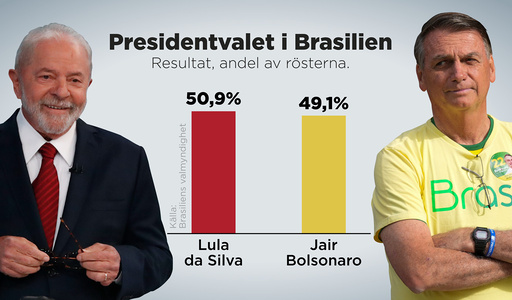 Can only have shorts

Some day afterwards, he sent out his Chief of Staff, Ciro Nogueira, to announce that the President has 'approved the transition process' – the closest thing to Bolsonaro has come recognition of the outcome so far.

A week ago he did not even show up when foreign ambassadors were to be welcomed in the Presidential Palace of Planalto, an event where the President normally always holds.

It is a health issue. He has wounds on his legs, rose fever, said Mourão to the newspaper O Globo.

"So he can't wear long pants, would he come in shorts?"

Called "Tropical Trump" when he sailed up for the 2018 election as controversial right-wing favorite. The followers see him as a breath of fresh air and outsider against a corrupt elite, the skeptics describe him as a populist and right-wing extremist.

During his career, the 67-year-old ex-military Bolsonaro has made a wide range of manschauvinist, homophobic and racist statements, and has also expressed a positive view of the military juntas that ruled Brazil between 1964 and 1985.

The most serious event was when he was severely stabbed during a campaign meeting for the 2018 election. The event forced him to a long recovery and a number of operations even after he won the election. The perpetrator was judged to suffer from mental disorder, and was therefore not convicted of the crime.

He is in his third marriage and has four sons and a daughter. Several of the children are also politically active.