The Danes celebrated the country's first World Cup gold in the team competition.

The Swedes were not as loud.

It was mostly a puff when it mattered - and ended with another world championship off the podium.

It's always annoying to finish fourth. We have to dare more, take the turns, says the captain Bo Jenå.

It is one thing to win team competitions in the Nations Cup. There, the dressage national team has both dominated and impressed in recent years. But the whole thing is somewhat of an illusion. The world's foremost combination puts the best gunpowder on the championships and other major competitions.

When it comes to the World Championships, the Swedish elite riders are not quite up to the high goals. The hope was to avoid another fourth place, but it was never close to a medal.

I'm disappointed, but in this company a fourth place is good. In that way it is a good fourth place rather than a bad one, says Bo Jenå.

Instead, the British challenged the Danes for the gold and the Germans took the bronze by a good margin to the Quartet Patrik Kittel, Therese Nilshagen, Juliette Ramel and Jeanna Högberg. 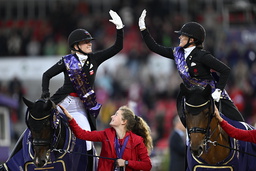 Pontus Lundahl/TT
The job done, the gold done. Nanna Merrald Rasmussen and Cathrine Laudrup-Dufour congratulate each other on the Danish World Cup success.

I tried to ride on the border, but keep on the right side of both chaos and brilliance. In a team competition you have to take calculated risks and he did it so well, says Laudrup-Dufour, the world star who secured the Danish gold.

On social media she also made an appeal to the home audience, not to start applauding until she and Vamos Amigos have halted.

It takes time for a young horse to get used to this big arenas and why applaud before you are finished? The audience did well, says Laudrup-Dufour.

Her 81,864 was the highest percent of the team competition.

Kittel disappointed in the judges

Patrik Kittel at Touchdown was last out of the Swedish combination and came into the course after the Danish.

The demand for the lagankankaret was as simple as difficult: put new personal best by far. The rest was about that the German Frederic Wandres had to underprester on the Duke of Britain.

Not one thing or the other came true.

Kittel did his job, not more. Afterwards he was more than satisfied with his horse and how it reacted to the audience reactions after Laudrup-Dufour's full meeting. The disappointment he directed against the judges who gave no more than 76,522 percent and really pissed him off on the same score since Wandres got 76,661.

Ready for the Olympics

One of the Band-Aids on the Swedish wound is that the fourth place took the national team to the Olympics in Paris in 2024.

It was one of the goals. Now it's up and it feels good. Then we had aimed at a medal place here. We had a good feeling and we had practiced well. But if it isn't flawless inside the track then the point goes down, says Jenå.

We need a horse that goes up to 79-80 percent for us to be there. I think one of the ones we had here hopefully can do that already next year (EM in Italy).

Dressage continues with the individual competitions, GP special on Monday and GP kür on Wednesday. Trion Kittel, Ramel and Nilshagen moved on to the special while Högberg did his in the World Cup.