Expert: Ukraine gives up Donetsk to some extent

The fact that President Volodymyr Zelenskyj calls on civilians to leave Donetsk can be interpreted as meaning that Ukraine is now giving up the region to some extent.

You are not willing to risk civilian lives," says war scientist Oscar Jonsson.

The Ukrainian government has decided on the mandatory evacuation of civilians in the Donetsk region. Anyone who chooses to stay may sign a formal refusal and is responsible from there for his own life.

I think you can read this evacuation as that you have given up on the territory to some extent and are not willing to risk civilian lives there anymore," says Oscar Jonsson, doctor of war science at the Swedish Defence University.

"We are not Russia," said Zelenskyi in his speech to the nation on Saturday, every life is important and Ukraine will do everything to protect civilians from "Russian terror".

According to Jonsson, there are two humanitarian aspects that can form the basis of the evacuation decision.

On the other hand, as Zelenskyj himself says, the more civilians get out of the area, the fewer the Russians can kill. It has been a clear part of the Russian strategy to level cities with people on the ground," he says and continues:

But the infrastructure, i.e. water and electricity, is also so damaged that it is not possible to live there. The disadvantage of the evacuation is that Ukraine risks losing its grip on Donetsk, says Jonsson.

The consequence, and the balance that becomes interesting in this, is that Ukraine's grip on the region is weakened.

If you empty the region of civilians, it is, in quotation marks, only the military forces that must be defeated in order for Russia to gain control of the region.

Russia's main military goal right now is to take control of the rest of the Donetsk region, but that loss would not be critical for Ukraine," says Jonsson.

Ukraine is now focusing on trying to reclaim the occupied Cherson region in its southern parts.

Ukraine has shifted its focus to a possible counter-offensive in Cherson in the south instead. 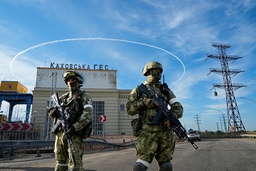 AP/TT
The Cherson region was occupied by Russia quickly after the beginning of the invasion war in 2022. The picture shows two Russian soldiers guarding a power plant on the Dnieper River. The picture is taken during a journey organized by the Russian Ministry of Defence.

Civilian Ukrainians who choose not to leave the Donetsk region will be allowed to sign a formal refusal from mandatory evacuation, reports Deputy Prime Minister Iryna Veresjchuk.

The signatory admits that he understands the risks of remaining in the region and becomes personally responsible for his life.

The procedure is unusual, says Jonsson.

I haven't seen any examples of this before," he says.

Jonsson's view is that the civilians who remain do not do so for political reasons in the first place. The reason is that you do not want to leave your home.

That people don't want to leave houses and homes I think is a bigger part of the decision than the military fighting.