Earth's glaciers on their way to disappear

An overwhelming majority of the earth's glaciers are shrinking and many of them can disappear in the not too distant future, according to a series of new studies.

This means that we can soon experience the same condition as during the postglacial heating period 8 000-4 000 years ago.

During that period, the average temperature was two to three degrees higher than today, and the huge ice sheet in Greenland was significantly reduced.

Then all the glaciers in Sweden and the Alps disappeared. They melted away, just like many other glaciers around the world," says Nina Kirchner, glaciologist at Stockholm University.

Then they came back. Little ice age between the 1300s and 1800s was the highlight, and in Sweden they were actually the biggest around 1910, in the Alps somewhat earlier, around 1860. 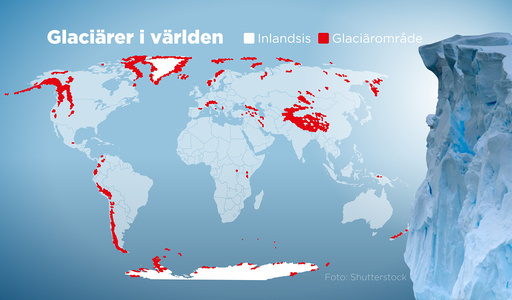 The number of glaciers in the earth is about 200,000, some of the largest being found in Alaska, Arctic Canada and the Himalayas (the ice caps in Greenland and Antarctica are not included).They cover an area of approximately 726,000 square kilometres, about 1.6 times Sweden's surface area, and their combined ice volume has been estimated at 158 000 cubic kilometres.

It may sound impressive but represents only a fraction, half a percent, of the total ice volume on earth. Most of the ice in the world, 99.5 percent, is found in Greenland and Antarctica. This means that the melting of the usual glaciers has only a marginal impact on the rise in sea level. Nevertheless, the situation is assessed as serious by most scientists.

Of course it is serious, not for the sea level, but for ecosystems in many areas. They will be damaged when the water supply decreases or is affected by the melting time. The plants will get out of hand with the water supply for an important time of the year. We do not know how it will be, says Nina Kirchner.

It has never been as fast as it is now. The melting at the beginning of the postglacial heat period went more gradually. 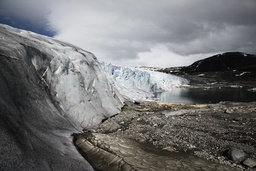 Berit Roald/NTB/TT
Since the 1980s, the glaciers have shrunk strongly throughout Scandinavia. The picture shows Nigardsbreen, one of the arms extending out from the glacier Jostedalsbreen north of Sognefjorden in western Norway. In just over a hundred years Nigardsbreen has become 2.6 kilometres shorter.

Other researchers have pointed out that there may be a shortage of drinking water in some parts of the world, especially in southern Asia, where it is dependent on melting water from the glaciers of the Himalayas and the Tibetan plateau.

One of the new studies, published in the scientific journal Nature, suggests that almost all glaciers have shrunk, and that the melting has also accelerated. The glaciers together lost 227 gigaton of ice per year from 2000 to 2004, but 298 gigaton per year from 2015 to 2019.

Interestingly, until recently, the glaciers have lost larger quantities of ice than both Greenland and Antarctica despite the fact that the latter contain much larger ice masses. However, according to the United Nations Association of Sweden climate panel IPCC, Greenland seems to have recently pulled away a bit.

In another study, published in Geophysical Research Letters, the researchers analysed all glaciers that enter the sea in the northern hemisphere. The analysis suggests that 85.3 per cent of the glaciers have retreated since 2000. In total, their expansion decreased by 7,527 square kilometres and more than seven per cent of the glaciers lost their contact with the sea during the period.

A third study, in Nature Geoscience, found that the amount of water in the world's mountain glaciers seems to have been overestimated. The amount is about 20 percent less than previously thought, which does not bode well for the future.

So what can we expect? According to the IPCC, 80 percent of the glaciers in the high-alpine areas of the earth will have disappeared completely or decreased sharply by 2100. In Sweden, 24 glaciers have decreased by an average of 50–60 meters during the period 2010-2018. The biggest decrease is around Kebnekaise where four glaciers have shrunk even more, at most by 120 meters.

A glacier is a mass of ice formed by the accumulation of snow and moving across the landscape by its own weight. The glaciers of Antarctica and Greenland, both larger than 50 000 square kilometres, are called ice sheets.

Around ten percent of the earth's land area is covered by glaciers with a total volume of about 33 million cubic kilometres, of which 91 percent in Antarctica. This may sound a lot but is only a fraction of the ice masses that covered the globe as recently as 12 000 years ago, during the ice age. Then one third of the earth's land area, including the whole of Northern Europe, was covered by ice. (NE)